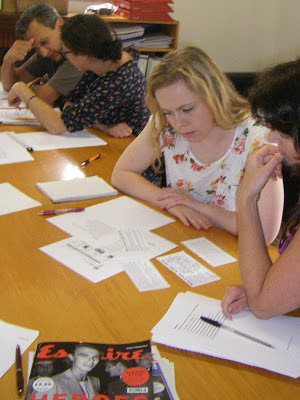 In our previous articles, we have been looking at materials specially designed for language teaching. We’re now going to consider the use of authentic materials in the language classroom.

The nature of authenticity
According to Nunan (1988: 99) authentic materials are “those which have been designed for purposes other than to teach language”. In other words, they are texts – written or spoken – whose purpose is to communicate meaning in a specific social context. This is significant because by providing opportunities for learners to interact with real materials and communicate with others about those materials, we establish a fertile environment for learning and enhance learner motivation. It’s also likely that the language used in these materials will be more natural than the examples we see in coursebooks, which often seem rather artificial.

Types of materials
Authentic material is any material that was not designed for language learners, so the range of things that you can use is virtually endless. Short written texts such as a ticket, a note or a postcard can make intriguing introductory activities, while more advanced classes can explore longer texts such as newspapers, magazines and short stories. Of course, the type of text will be selected according to the interests of the students. A celebrity gossip magazine is just as good as a serious journal article for authentic language input. For a lesson on the theme of travel, you can use brochures, guidebooks and timetables, and also shorter texts such as menus, bills and even road signs. Adult learners may work with texts from their own professional context, such as reports, statistics and diagrams. And very young learners can enjoy materials created for English children, such as cartoons, nursery rhymes and songs.

Authenticity and difficulty
The main argument against the use of authentic materials is that they may be too difficult for learners to understand, particularly at lower levels. The difficulty of a text is a combination of various factors. Top-down factors include the familiarity of the topic and the context, and the cognitive complexity. If we give our learners a text about a topic that they are already familiar with and interested in, it will be much easier than a topic that’s completely new to them. Of course, short texts are generally easier than long ones, provided the density of information is not too great, and the organization of the text can also be an important factor. Visual support in the form of pictures or diagrams that illustrate the text can make it much more accessible, as can the layout and organization of the text itself. On the other hand, long complex sentences, unfamiliar grammar and obscure vocabulary will make it much more difficult.

There are two approaches to overcoming this difficulty. The first is to ensure that the items selected are of approximately the right linguistic level for the learners. This will restrict your choice of material, but avoid the need to simplify it, which would destroy the authenticity. The other approach is to grade the task; even with difficult texts, tasks can be devised that are not too challenging linguistically.

Finding materials
The most effective way to source useful authentic materials for your lessons is to build up a bank of materials, adding to it whenever you find something that might be useful. For example, reading a crime report in a newspaper, you might notice that it contains lots of examples of past tenses in the passive voice, so you file the article away for future use. However, you will often want to find some material relating to a specific topic and you will need to search for it, either using a search engine or by browsing through some likely websites. This becomes much easier once you have developed your familiarity with the available resources and identified a few favourite websites.

In the wired world, it’s very easy to find materials - including text, audio and video - for every purpose. And especially if you are using an interactive whiteboard, it’s just as easy to project any authentic materials you select for use as it is to project the courseware. The use of technology in the classroom is an enormous topic, which we’re going to address in our next series of articles.

The second lesson of the foreign language experience builds on the first one to show how lessons progress in a series. The lesson is followed by a discussion of the techniques used, bringing out the links with your own teaching practice. 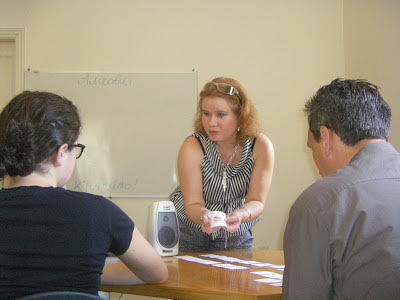 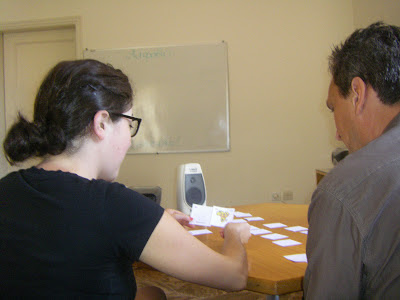 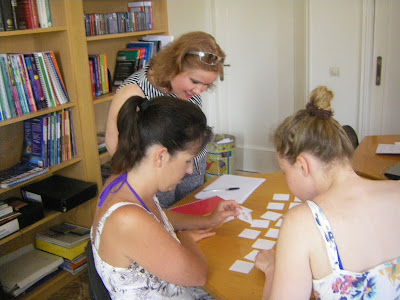 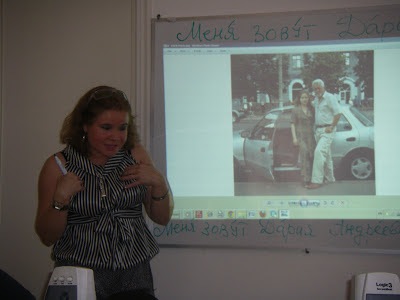 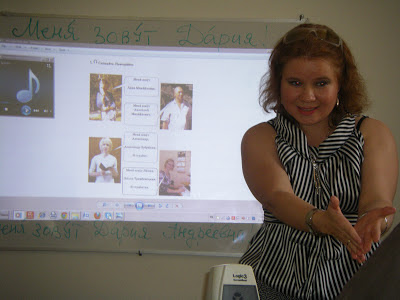 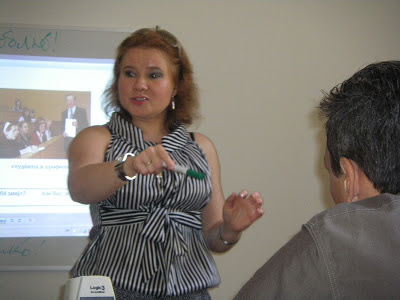 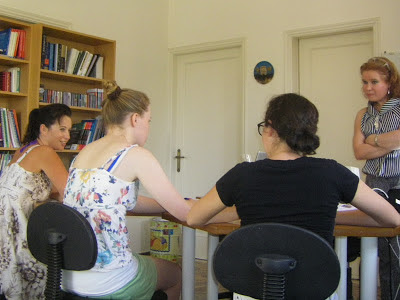 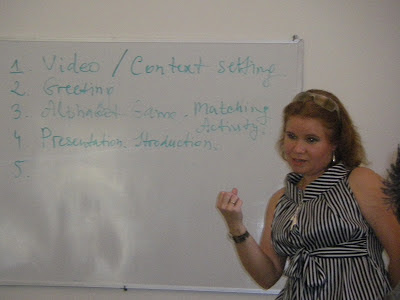 Posted by TEFL Greece at 2:06 PM No comments:

The purpose of the foreign language lessons is to enable you to experience the communicative approach to language teaching from the perspective of the learner. You're learning a little of a new language, but more importantly you're learning about the processes of teaching and learning. 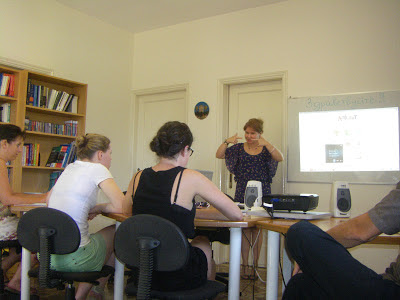 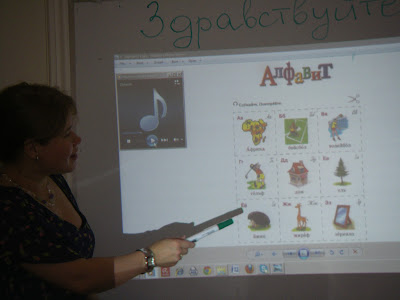 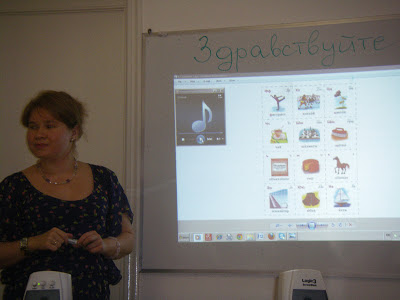 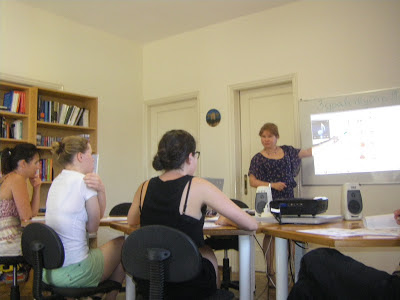 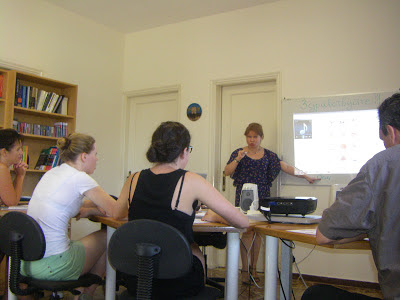 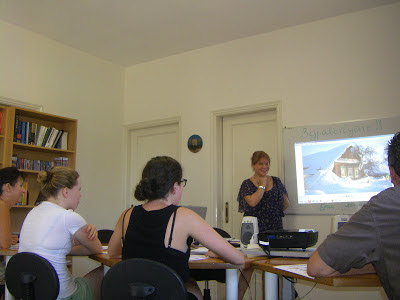 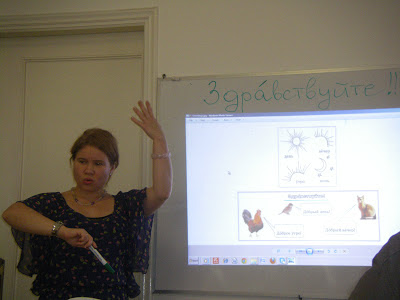 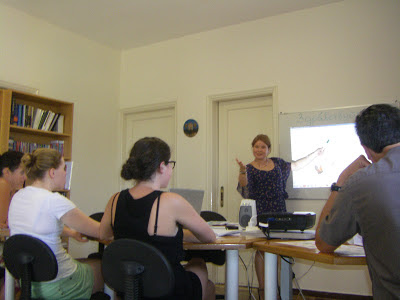 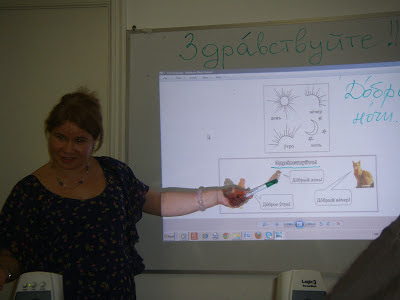 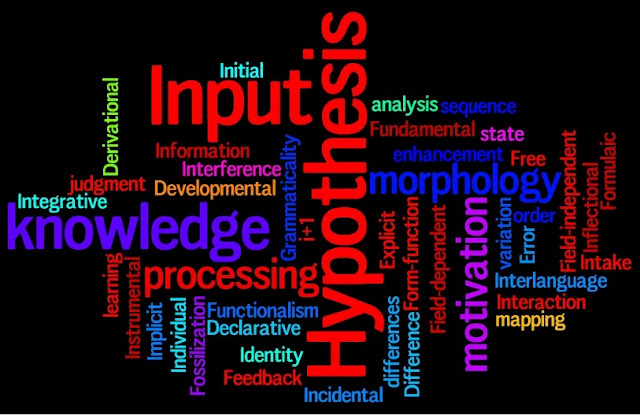 Feedback
The response that learners receive to their language output, either in the form of explicit correction or implicit forms such as recasts

Formulaic sequence
A phrase or chunk that is acquired as a whole, without analysis into its component parts

Free variation
Deviations in a learner’s interlanguage from the target forms, which is not explained by specific factors

Fundamental Difference Hypothesis
The claim that L1 acquisition and (adult) SLA differ radically, illustrated by the difficulty for L2 learners to become native-like, lending support to the belief that L1 acquisition is guided  by innate mechanisms which are not available for adult SLA

Identity Hypothesis
In contrast to the Fundamental Difference Hypothesis, the claim that the processes of L1 and L2 acquisition are the same

Implicit knowledge
Unconscious knowledge that a person is unaware of, such as the knowledge that enables proficient speakers of a language to produce correct utterances without consciously knowing the rules

Incidental learning
Learning aspects of a language when attention is not explicitly focused on those aspects, such as incidentally learning vocabulary while focusing on reading comprehension

Individual differences
Characteristics such as aptitude, personality and motivation which may influence how effectively a person learns

Initial state
The starting point for language acquisition, thought be some researchers to include access to Universal Grammar

Interaction Hypothesis
The view that in order for language acquisition to take place, learners need to use the language in interaction

In our previous article, we looked at ways to adapt coursebooks in order to tailor your lessons to the needs and interests of your students. We’re now going to explore some of the sources of material that can be used to supplement the coursebook.

Many publishers create dedicated websites for each of their major courses, providing a variety of materials to extend the book. These are an ideal supplement as they follow the structure and content of the course. Materials range from printable worksheets that provide extra written practice to interactive games for students to play online.

Apart from the sites that accompany specific courses, the websites of the major ELT publishers also have lots of general materials and ideas for activities. On some sites, you can also share your own ideas in a discussion forum, or even publish your own materials.

In addition to websites run by ELT publishers, there are lots of other sites that provide materials designed for use in lessons. The BBC websites provide an enormous amount of material for learning English, including lots of audio and video material related to current news. There are many sites offering podcasts graded for all levels of ability, and others with authentic listening material accompanied by comprehension activities. And of course almost any website can be used as a source of authentic material that can be exploited in the classroom. 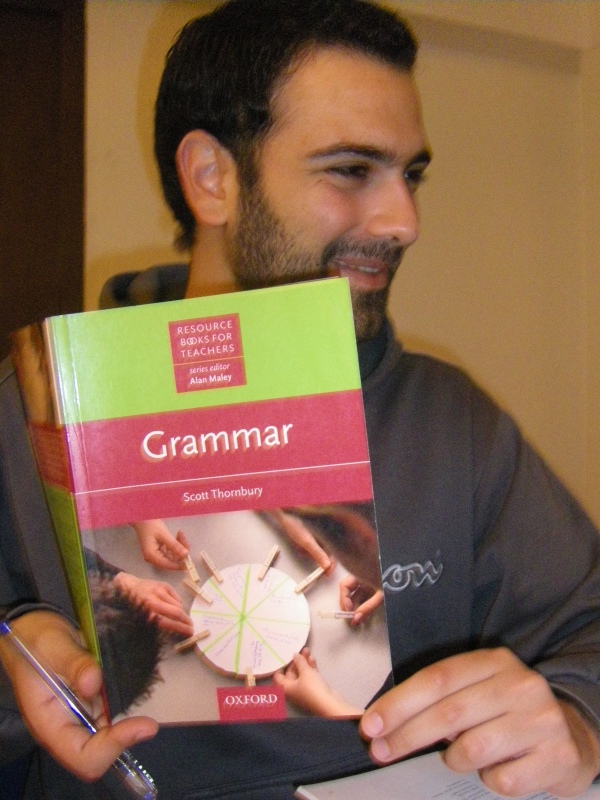 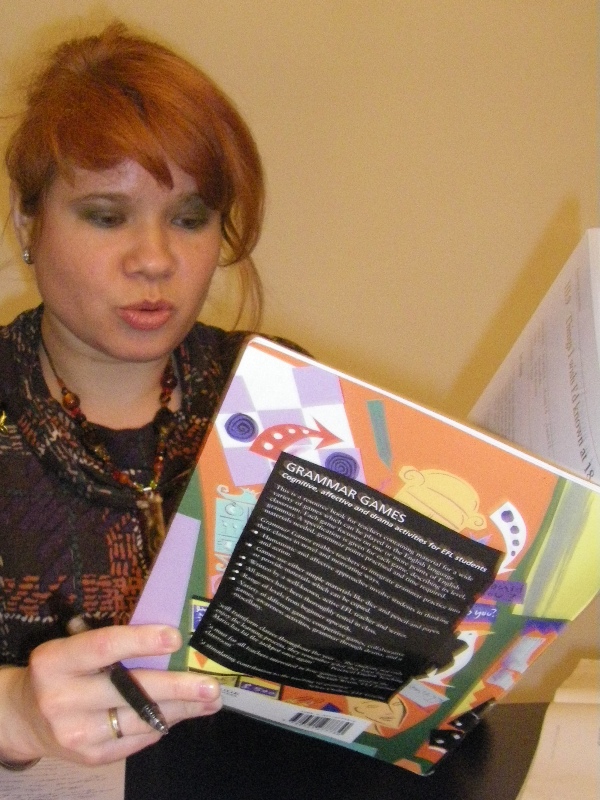 Resource books may be used to supplement any course. They are often designed to provide additional communicative activities in the form of games, pairwork activities and discussion topics. Some focus specifically on grammar, vocabulary or pronunciation, so you can pick activities that target areas where your students need extra practice.

As well as providing specific activities for practicing certain language items, resource books can be a source of ideas that you can adapt to apply to other points. For example, an activity designed to practice conditional sentences could be adapted to focus on reported speech. Using this type of book enables you to build up a flexible repertoire of fun activities, and while some require you to prepare materials in advance, others can be used without preparation as short filler activities whenever you have  a few minutes left at the end of a lesson. 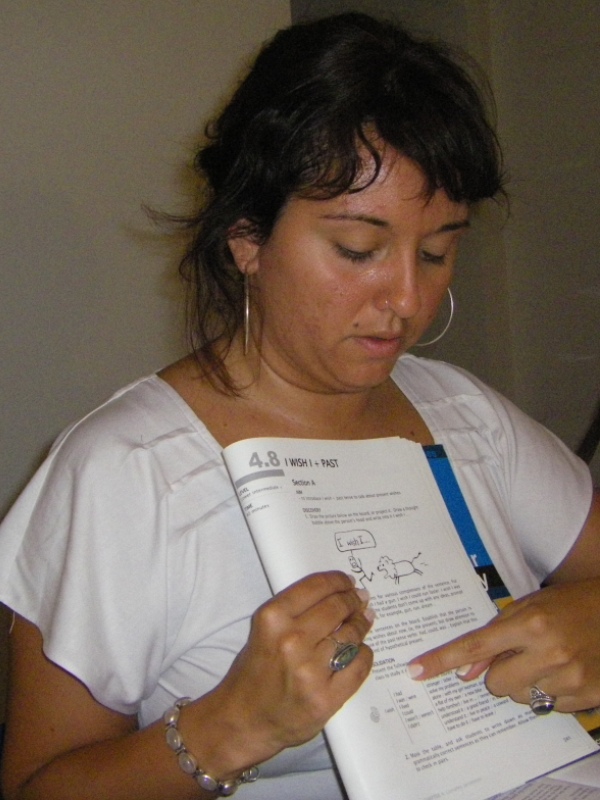 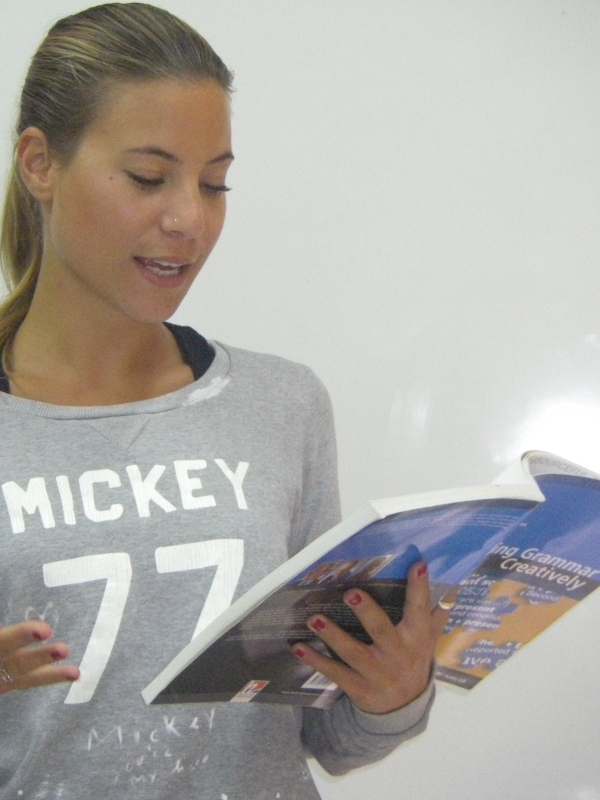 Most of the ideas considered in this article relate to materials specially designed for language teaching. In our next article, we’ll consider the use of authentic materials.

Posted by TEFL Greece at 6:49 PM No comments: